On 8 February 2021, Shakespeare is dead, but here we are took place. The kick-off event of Shakespeare is dead, the very first festival in the Dutch language area that focuses on the art of playwriting, has now also been converted into a podcast which can be listened to via Soundcloud.

Normally, the Shakespeare Is Dead playwriting festival should have taken place in Leuven in February this year. Unfortunately, due to corona, these plans could not take place. As an alternative, Theater Bellevue, Het nieuwstedelijk, Toneelschrijfhuis and deBuren joined forces and organised an online meeting to take a closer look at the state of playwriting in Flanders and the Netherlands. Both Flemish and Dutch playwrights and theatre makers, including Stijn Devillé (Het nieuwstedelijk), Martine Manten (Toneelschrijfhuis) and Lot Vekemans, were brought together for a meeting, exchange and reflection. 112 interested people joined them live via zoom. 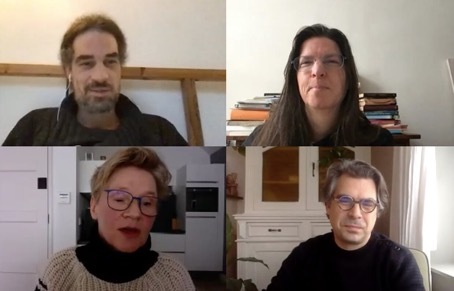 What is the playwright's responsibility? Should writers adapt to the changing landscape or should others? And what about the relationship between writers and makers? These are just some of the questions that were discussed during the online event. Vekemans said that if we compare the situation in the Dutch language area with that in our neighbouring countries, it is striking that playwrights in Germany have much more autonomy and a larger market than they have in Flanders or the Netherlands. The playwright also has a significantly higher status there. This is also the case in the United Kingdom, according to Vekemans. Playwrights are held in high esteem there and therefore have more say in the creative process. In general, Vekemans, Devillé and Manten therefore agree that a higher status in the Netherlands and Flanders would benefit the playwright and the cooperation between authors and makers. However, there are also many differences between Flanders and the Netherlands when it comes to playwriting. For example, the speakers said that in Flanders, playwrights are virtually obliged to perform as theatre makers as well, because otherwise it is very difficult for them to get their texts on a stage. So, most writers in Flanders are also directors. This is less the case in the Netherlands. Moreover, young playwrights receive more guidance there than in Flanders.

So, how can things be improved? First of all, Devillé, Manten and Vekemans argued, there needs to be thorough investment in the relationship between playwrights and producers and both parties need to adapt to each other's needs and expectations. Also, a stronger framework needs to be created within which playwrights and directors can meet each other regularly. After all, it is important that playwrights know more makers and vice versa. In this way, the connection between creators and writers is facilitated and the relationship between the two parties can be improved. Moreover, according to the speakers, especially in Flanders, there should be more support for young authors and more initiatives are needed that create a safe place for young artists to write theatre. Finally, the importance of making agreements was also emphasised in the online meeting. In order to achieve a fruitful collaboration, creators and writers must communicate clearly about their expectations and agree on what each one's responsibilities are. Vekemans said, for example, that theatre writers sometimes think they are made of glass and therefore suffer from 'glass delusion'. But according to her, this does not have to be the case. She believes that writers should not act according to their vulnerability and should sometimes stand their ground a bit more.

This discussion was supplemented by personal statements by playwrights Edna Azulay and Dounia Mahammed and dramatist Peter Anthonissen about playwriting today. The statements were then further discussed in several break-out rooms, where there was a conversation about how the beauty of playwriting lies in showing your most vulnerable self as an author. There was also a reflection on the essence of theatre texts and how writing comes down to helping people, who cannot easily find the words themselves, in finding the words. The full statements by Azulay, Mahammed and Anthonissen can be found at www.shakespeareisdead.be.

You can (re)listen to the entire conversation with Stijn Devillé, Martine Manten and Lot Vekemans on playwriting initiatives in Flanders and the Netherlands and to the impressive statements by Azulay, Mahammed and Anthonissen at https://soundcloud.com/deburen-eu/shakespeare-is-dead-but-here-we-are-gesprek-over-toneelschrijven-2021.

Shakespeare is dead, but here we are was an initiative of deBuren, Theater Bellevue, Het nieuwstedelijk and Toneelschrijfhuis.

Vlaams Cultuurhuis de Brakke Grond and Theater Bellevue are joining forces to organize Shakespeare is Dead, the festival for the new theater text. What was instigated by Het nieuwstedelijk in Leuven, Belgium, now also ignites in Amsterdam on March 24 and 25

Participate in Shakesepeare is dead Amsterdam on March 24 and 25 at Theater Bellevue and Vlaams Cultuurhuis de Brakke Grond.

Shakespeare is dead is looking for contemporary playwrights and plays to introduce in the Dutch speaking world.

Read the State of the Young Playwright as delivered by Anouk Friedli on Friday 25 February at the first edition of Shakesepeare is dead, contemporary playwright festival.

‘The state of’ a playwright, Lot Vekemans

This is my state.
And that of no one else.
The state I am in
The state of Lot Vekemans.
Who is also a playwright.

Discover 'The state of' of Lot Vekemans as delivered on Friday 25 February at the first edition of Shakesepeare is dead, contemporary playwright festival.

LUCA school of arts organises workspace aiming at creating a safe and open space for each participating playwright to work on a (new) script, scene or text close to their hearts. The goal of this workspace is not to produce a polished, finished (and consumer-friendly) script or scene, but an exploration about and around the texts. Apply before February 4.

Discover the works and authors selected for the Shakespeare is dead festival!

Discover the Dutch and Belgian authors who are selected for the festival.

In anticipation of the festival, which has been moved to February 2022, we proudly present this website.

Vondel was a woman

In April, Theaterencyclopedie pays attention to forgotten female playwrights from the 17th and 18th century as part of the project Vondel was a Woman.

The what, why and how of De Leesclub: a dialogue

The European Drama in Translation Network announced its 2021 selection of translated drama texts recommended for production and publication.

Shakespeare is dead uses cookies to make your browsing experience easier. By continuing to use this website you agree to this. Read more